Should You Use Cotton Buds, Sticks & Tips to Clean Your Ears?

If you’ve suffered from a blocked ear before, then you’ll know how frustrating it is and how you’ll do almost anything to get rid of it. But as tempting as cotton buds are, they can actually be very dangerous and even damage your eardrum and hearing. 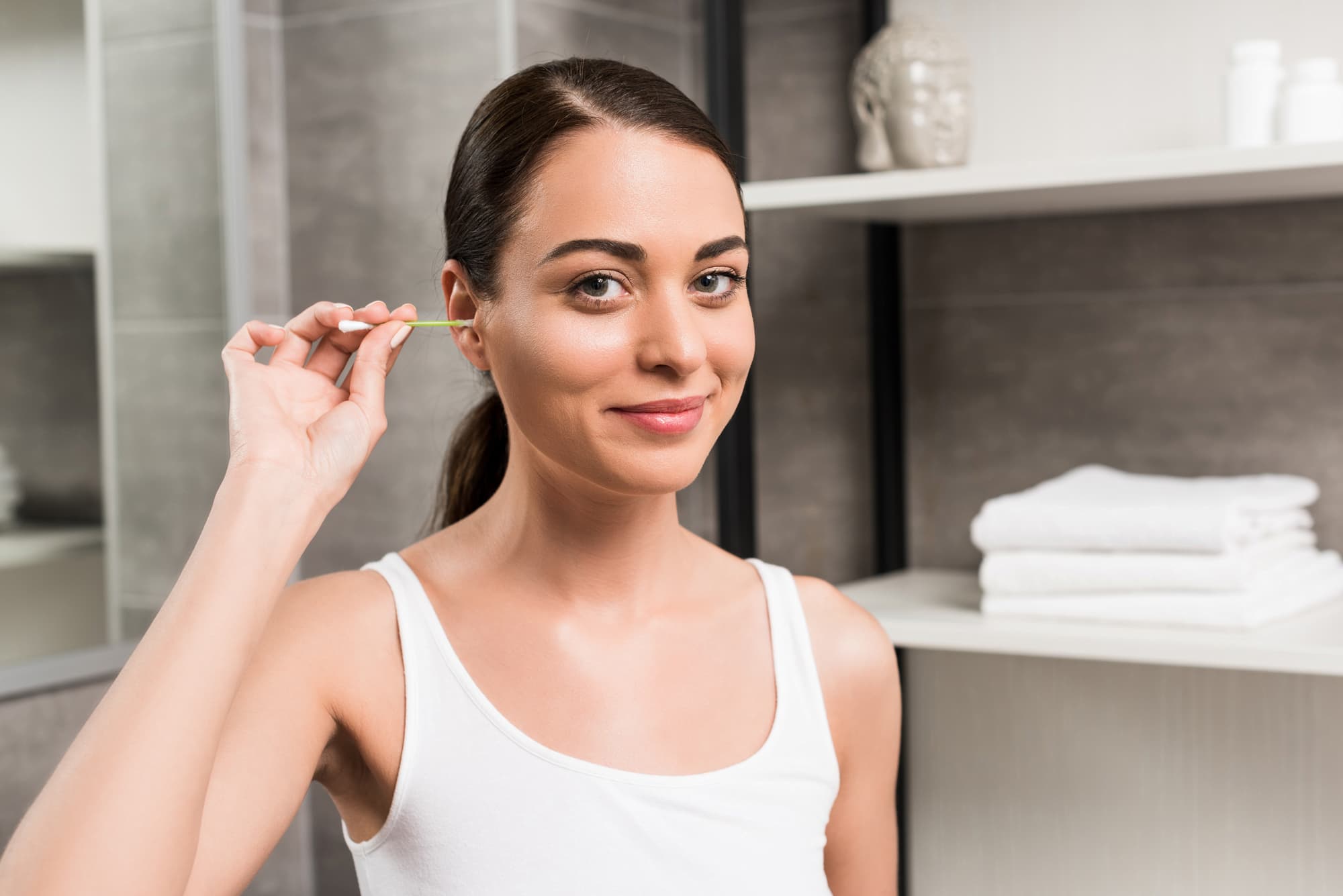 Why Are Cotton Buds So Bad?

They Can Damage Your Hearing

Cotton buds aren’t alone in the list of things you shouldn’t stick in your ears when trying to clear a blocked ear or clean your ears. Other common items people use to attempt to clear their ears include bobby pins, tweezers, pens and pencils, and their fingers. But these items can often push wax further down the canal, worsening symptoms. They can also cause unintended trauma to the ear canal or drum.

When you stick a cotton bud in your ear, it doesn’t take much for it to reach your eardrum. Eardrums are delicate structures and even a small amounts of pressure can cause it to perforate or dislodge the tiny hearing bones in the middle ear. cause Both of these things can cause a conductive hearing loss.

Many people who use cotton buds do so even when they don’t have a blocked ear. Often, people use them to ‘clean’ the earwax from their ears, or dry their ears after showering. But our ears are actually designed to self-clean. Ear wax that is formed in the outer third of the ear canal migrates out of the ear via a ‘conveyor belt’ motion of the skin’s surface, assisted by jaw movement. It then either falls out of the ear or can be wiped away.

They strip your ear of wax – which can actually be protective

People often think they need to ‘clean’ their ears as earwax is ‘dirty’ or unhygienic. It is ok to wipe wax away as it emerges at the entrance to the ear canal, but wax sitting inside the canal (where it cannot be seen) is a very protective substance. It is sticky, so it traps dust and dirt prior to it entering the ear canal. It is acidic, so it helps prevent infection. It is also bitter to the taste so it deters insects! It needs to be left alone to do its job.

It is only when excessive wax is produced resulting in a blocked or impacted ear that earwax should be removed. In that case, you should try earwax softening drops or seek professional earwax removal by a service such as Earworx.

They can lead to itchy ears

When you use a cotton bud to clean the ears, or dry the ears after showering, you strip the ear of wax and therefore moisture. Over time, the ear becomes dry, and therefore itchy. This makes you want to pick the cotton bud up again! Throw the cotton buds away and allow some time for the wax to build back up. And if you need to dry your ears after a shower, try a hairdryer on low heat instead. Don’t risk pushing wax further down the canal or causing trauma to the ear canal or drum.

Click the link below to read about an unfortunate man in his early 30’s who was unaware a dislodged cotton bud tip was stuck in his left ear. This led to a potentially fatal condition; necrotising otitis externa.

You might have seen articles recently which outline how bad for the environment cotton buds can be. They’re extremely wasteful since they do not biodegrade and can only be used once. The UK is planning on banning cotton buds from next year – a move which has gained a large amount of public support.

If you are producing too much ear wax or your wax is becoming impacted, there are other methods and tools you can use to get rid of the blockage.

The safest at-home remedy is earwax softening drops, which can be bought at your local chemist. They can help to soften and break down impacted wax, allowing the natural self-cleaning process of your ears to carry with wax out.

This is a safe method as it does not require you poking and prodding your ear, which could potentially cause harm to your ear canal or eardrum. However, earwax softening drops are not suitable for people whose eardrums have been perforated or people who have undergone ear surgery.

The guidelines for war wax removal recognise micro-suction as a safe and effective method of earwax removal. if It is the procedure offered by Earworx and is the preferred method of wax removal by Ears Nose and Throat surgeons.

It is a dry technique, unlike syringing, making it suitable for people with perforated eardrums, diabetics and people with depressed immune systems. It is a relatively quick and easy procedure, and includes an education session at the conclusion of the appointment to help you to understand how to manage wax build up into the future.

Before the micro-suction begins, you fill out a questionnaire relating to your ear history and symptoms. A specially trained nurse will then inspect the ear canal and eardrum with a speculum to check if the amount of wax necessitates the micro-suction procedure.

In the case that wax does need to be removed, a small micro-suction catheter is inserted into ear canal and begins to gently suck out the wax. Throughout the entire procedure, a nurse will use loupes (a small microscope that sits on the nurse’s glasses), to maintain direct vision into the ear canal at all times.

So next time you have a blocked ear, rather than resorting to cotton buds in an attempt to get move it on, contact Earworx and have a trained professional treat your ears with the delicacy they require.